Paul and Dawn Ventress have both owned dogs since they could first hold a lead.

Dawn and Paul have owned, worked and trained Hungarian Vizslas for 12 years and find them to be a most versatile, intelligent and loyal companion, both in the field and at home.

Paul has predominantly had a working life with dogs, both working them in the field and professionally training them, specialising in the HPR breeds. He has previously owned, trained and bred German wirehaired pointers, and is also the first Englishman to be eligible to join the KBGS (Klub  für Bayerische Gebirgsschweißhunde) or in English,  ‘Club for the Bavarian Mountain Scent Hound’.

Paul trained in Germany, passing the Vorprufung tracking test and is a registered Schweißhundfuhrer (scent hound leader). This very special protected breed is revered throughout the tracking world, and is used to track the cold scent of a wounded or injured animal so it can be recovered and its suffering ended. 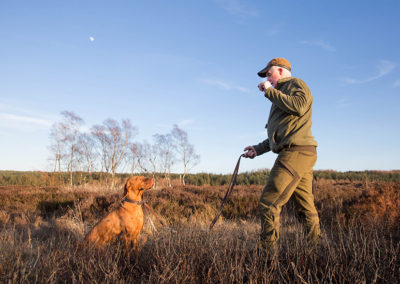 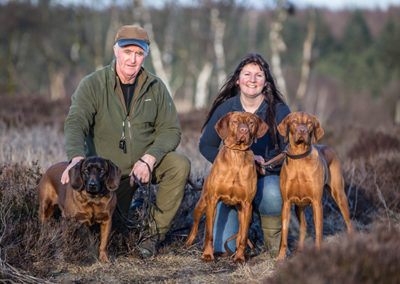 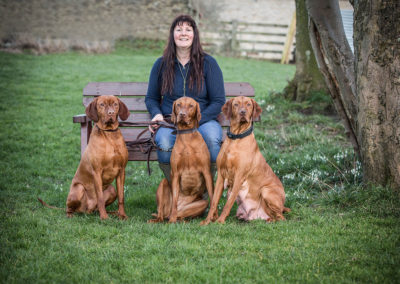 From a young girl Dawn helped her grandparents, who bred, showed and judged nationally at dog shows. Their preferred breeds were Lhasa Apso, Maltese and Shih Tzu. They also bought Dawn her first dog, a Rough Collie named Laddie. This instilled a love for the larger breeds from the very early age of four years old. Throughout the years, she has also owned a Dobermann and a Golden Retriever.

For many years Dawn had wanted to own an HPR (Hunt, Point and Retrieve) breed after seeing them working and field trialing, settled on the Hungarian Vizsla as her HPR of choice. After the sad passing of Merlin and after much research, Dawn purchased Barney, her first Hungarian Vizsla. Barney was wonderful dog but quite a challenge in the field and so he was taken to training classes, but without much success. Dawn was then advised to contact Paul, as his reputation for training gun dogs, especially HPR breeds was second to none! Paul also had a Hungarian Vizsla dog, Alfie, who was the most amazing, handsome and intelligent working dog that Dawn had ever seen working. The change in Barney, through Paul’s special training and handling, was remarkable. The rest, as people say, is history.

Dawn has since gained a Diploma (level 3) in Dog Behaviour and Training.

Paul and Dawn live for their dogs, caring passionately about their chosen breed of HPR. They strive constantly to champion the correct and careful breeding of selected individuals, for trueness of type, maintaining the standards and welfare set by the breed society and Club for the future welfare and health of this versatile breed.